A Downton Economy: Why we should subsidise great houses not tax them. 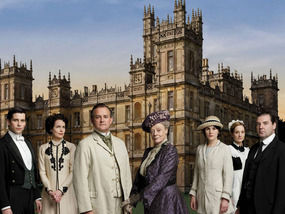 
'Vince' Cable has upset many this week by suggesting that in place of a fifty pence top rate tax, the 'Liberal Democrats' would be favourably disposed towards the idea of a 'Mansion Tax' instead. Of course, one's immediate suspicion is that this is yet another slightly disingenuous attempt by our increasingly mendacious coalition 'partners' to throw a tiger among the starlings by sowing seeds of innuendo and envy among the electorate. The veiled implication clearly is that those living in a two million pound home are most probably 'wealthy' and therefore more likely to vote Conservative. Any subsequent dismissal of the idea can then be attacked by Vince and his friends on the sneering basis that 'the Tories are against taxation of large homes because they live in them'. All very Daily Mirror.
However, let us for the moment give Mr Cable the benefit of the doubt and assume that his motives are honourable and that his purpose is fair. A mansion tax may well raise the £1.7 billion in revenue that analysts predict, but it would also directly hit hard working families already struggling under the burden of large leaking rooves, wings in desperate need of refurbishment and the bills associated with the tending of the large gardens, follies and box hedge mazes that are invariably part and parcel of these dwellings. There is a widespread misconception that because one lives in a big house one must ipso facto be 'wealthy'. This is of course poppycock. Many of the very poorest people of my acquaintance live in some of the very biggest homes. The upkeep of these piles, well documented by Noel Coward as early as 1933, is immense and every last penny is routinely hurled at them - but though the Van Dykes frequently have to go and the Bechstein Grand is more often than not 'pawned', the good people who have acquired these wonderful buildings strive to keep them standing.
In many respects this is a public service. A selfless act of financial martyrdom, which generally results in offspring being sent to second eleven public schools or the number and quality of domestic staff being reduced to the bare minimum.
It has long been my thesis that the answer to most of our current problems can be resolved by doing the exact opposite of whatever it is that the Liberal Democrats are proposing. On this basis, perhaps rather than taxing the owners of homes worth two million pounds and upwards, we should be giving them money instead. In so doing we would create a thriving 'Downton Economy'. Large homes were built to be staffed. The number of domestics needed to run a medium sized (fourteen bedroom) Great House in the early twentieth century was anything between ten and thirty servants, which in turn provided a good employment opportunity for many. Sadly the rising costs of staff, coupled with the invidious growth of 'socialism' spelt an end to these employment prospects and 'service' today no long affords the cachet of respectability that it once had.
It is a modest proposal perhaps, but instead of sending our young jobless to work for little or nothing at 'Tesco' or 'Aldi' could we not provide them with employment in our larger houses? The taxpayer could dispense some sort of financial incentive to the landowners and indeed a thriving 'stately home sector' could be established leading to a boom not only in the servant and service industries but also in the education of these listless young people. Scullery maids need 'training' as much as any car mechanic or pastry chef and perhaps instead of wasting years studying 'nail technology' at 'Lewisham College' young women might learn something useful, such as how to most efficiently polish a candelabra, starch a collar or clean out a fireplace.
It has long been my impression that Liberal Democrats are driven primarily by envy. They remind one of the Ronnie Barker character in the old That Was The Week That Was sketch, caught in an unenviable position that is neither looking up nor looking down. In all matters pertaining to these yellow perils one is certainly best off listening politely - and then looking away.
Posted by Jake Rees-Mogg at 05:07

Jake Rees-Mogg
As told to Otto Q. Categorically not the other one.